Charles Young was born on March 12, 1884.  He was only the third African-American to graduate from West Point and the first to reach the rank of Colonel.  In 1917 because of his decorated military service and combat history he was a leading candidate for a promotion to lead the U.S. Army in WWI.  This was an unheard of accomplishment and one that would be stymied by the forces that be.

White officers began requesting transfers and higher ranking officers began making life extremely miserable for Colonel Young – more miserable than before I should say.  He was placed on the temporary inactive list to prevent him from rising to a major leadership position during WWI.  Colonel Young was forced into retirement.  He would go on to teach as a Professor of Military Science during most of 1918.

But because the great Colonel Young was a officer and soldier to the bone, he once again proved himself physically and mentally and was reinstated into the Army.  He continued his service in the army and was reassigned to another regiment.

Colonel Young died in 1922 of a kidney infection in Nigeria while on military assignment.  He is buried in Arlington National Cemetery.  Salute to this great man, who achieved seemingly impossible feats during extremely challenging times.  A man that is proof we can achieve just about anything through faith, hard work, and perseverance. 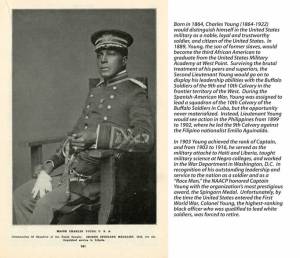