Denver is what I like to call a smedium city.  The city isn’t nearly as big as an L.A. or Houston; it’s closer in population and size to Boston or Seattle.  It’s a city with more sunny days then Miami.  It’s a city with a quality food scene that rivals Chicago and New York (on a smaller scale of course).  Denver keeps up with all the trends, has a multitude of events throughout the year, and is only hours from one of the most beautiful mountain ranges in the world.

Growing up in Denver, I was one of the many kids who desired to live in a city that people thought was cool.  We wanted so badly for Denver to be popular place with a jumping nightlife, and busy downtown streets – the important things in life ya know.  As city kids, we couldn’t stand the fact non-natives thought we were deep in theRocky Mountains, far from the societal norms.

While we were proud of being the “Mile High City”, we wanted people to understand it didn’t mean we lived on the edge of a mountain ridge high in the clouds. 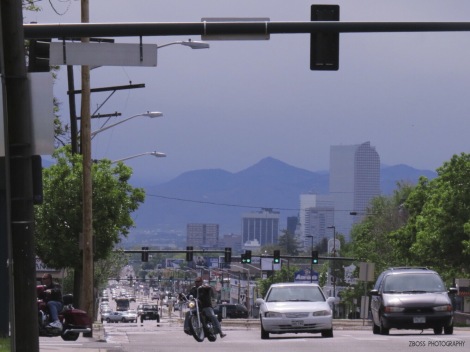 When I started driving as a teenager it took 15-minutes to get everywhere. Jump on I-25 or Colorado Blvd. and coastfrom Park Hill to Aurora in no time. Traffic jams were rare and you could hardly call rush hour a rush hour. When I moved out of my moms place, my roommate and I rented a house in South Park Hill for $400 each a month.  Going to breakfast on a Saturday was as simple as walking up to your favorite restaurant and getting a table.  And homes near the Five Points and North Park Hill were affordable.  Still we yearned for that big city feel.

Denver natives grew up constantly hearing about popular cities, with their culture, multitude of things to do, and unique aspects that made those places more “important” than our little city.  It was ok, because 303ers’ (and later 720ers’) knew what a gem of a city Denver really was.

Then someone betrayed us all and leaked the secret.  The vast majority of “out-of-towners” I have met have been great additions to Denver.  In fact most of the people I work with and encounter on a daily basis are not from Denver, and my love for mankind hasn’t waned since the dramatic increase in population.

Denver has steadily climbed up Forbes fastest-growing cities list.  It is currently ranked sixth on that list. The metro area population growth rate was at 1.74 percent in 2014.  That population boom has created many new dynamics for a city known for its clean streets, proximity to sea level, and dominant NFL football team.  Everything is gradually changing.  Most people would say those affects have been positive, others would disagree with that sentiment.

Denverites and long time residents did not anticipate thatwith this elevated status in the Union and surge in popularity comes a bigger city feel.  And with that “big city feel” comes a fantastical jump in home prices and rent that is has transformed how and where people live in Denver.  With an average home price of $696,000 and rents that average around $1,700, Denver is rapidly becoming one of the most expensive cites to live in.  Not to mention terrible traffic that gets worse every year.

Gone are the days of the 15-minute drives and clear highways.  $400 rents are a thing of mythical lore lost to the distant past.  Living in my old neighborhood and raising my children there is now a dream.  If I want pancakes from my favorite breakfast spot, I’ll just have to get used wakingat dawn on my off day to put my name on the list for a table.